Krystal McLeod is no stranger to struggle. Born into a working class, single parent immigrant home, McLeod, one of eight, has been one of the many victims of an unequal public education system from a young age.

Today, the twenty-year-old Long Island native is a politics major at New York University, and has devoted herself and her studies to bridging the achievement gap that looms over a great majority of American public schools by extending her hands to the students themselves.

McLeod, along with her older sister Kandice, spent most of 2013 designing an educational initiative she calls “My Right To Learn”, focused on improving the literacy and college-readiness skills of low-income minority youth within the greater New York City region. 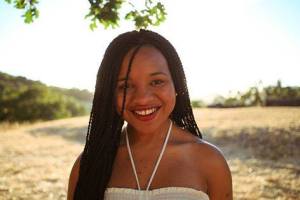 Krystal McLeod, President and Founder of “My Right To Learn”

McLeod was nominated to receive NYU’S Gallatin Global Fellowship in Human Rights later that year, which awards $5,000 grants to students taking significant steps in the human rights field. In 2014, she was presented with the Dalai Lama Fellowship, an international program that awards $10,000 to young people innovatively resolving global issues. She used both awards to fund “My Right To Learn”, enabling it to launch this past summer.

“The idea for ‘My Right To Learn’ has always been there,” says McLeod. “I had the privilege of eventually going to Catholic school on a scholarship, but I have six adopted siblings, all of whom have some kind of mental or physical disability and all of whom went to our local public school on Long Island. I witnessed, growing up, my siblings get funneled out of public school functionally illiterate.”

Approximately 86 percent of African American eighth grade students fall below the proficiency level required of the average eighth grader. The Civil Rights Data Collection Report from the 2011-12 school year shows that racial disparities actually arise as early as preschool and also found that the nation’s young men of color are disproportionately affected by suspensions and zero-tolerance policies.

Krystal and Kandice are the only two in their family who have been able to find success in their collegiate careers.

After being sent back to her home country of Jamaica for a bulk of her elementary school years, McCleod returned to the states only to fall behind in school. “She doesn’t talk about it much, but Krystal actually struggled with education when she was younger,” said Kandice. “The way our education system is set up, of not really ever cultivating the individual’s needs – she saw that gap, and she experienced that gap, and felt the need to fix it for everyone else.”

Using her own personal experience in American schools, McLeod began to design her curriculum. “As time went on, the program kind of developed itself,” she says. “Its really important to incorporate developing mindful leaders, students that are aware of the social and economic trends that are taking place in their communities.”

The program consists of four classes – My Rights, My Right To Truth, My Right To Literacy, and My Right To A College Education. Each course represents a key aspect of her mission, and combines the teaching of human rights, socioeconomic trends, literacy skills, and college preparation skills for the students involved. One of the biggest goals of the program is to inform students of what their future obstacles may be, and understanding why. 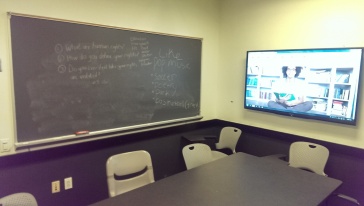 One of the “My Right To Learn” classrooms, located in the Silver Building on NYU’S campus

Instructors encourage the students to question the world around them, and emphasize a personalized education to nurture the growth of the individual. My Rights informs and explains the history of human rights, and exposes students to their “inalienable civil liberties” and what it means to be a global citizen through the analysis of documents, bills, and recent news articles. My Right To Truth helps expose ways for students to dissolve social constructs and governmentally induced social and economic barriers that plague minority youth. My Right To Literacy motivates students to actively engage in expressing their ideas through the written word.

The only optional class in the curriculum is My Right To A College Education, which teaches students about the application process and how to attain scholarships.

McLeod and her team of twelve facilitators visited the schools her siblings attended on Long Island, and accepted 20 applicants for the inaugural class.

The courses were held at NYU, meaning McLeod and her team was responsible for transportation. “My mom was driving kids. My sister was taking the train with kids, my brother was helping out.”

McLeod’s vision for “My Right To Learn” extends well beyond her college years. “After I graduate, I hope to turn the program into a non-profit organization. Public service is a way of life, and shouldn’t just stop when you get recognized,” she says. “If you’re really a public servant, you should be doing that on your Saturdays when no one is watching.”

Pedro Noguera, Peter L. Agnew Professor of Education at NYU and national expert on educational disparity, believes the problem of an “achievement gap” ultimately begins at a policy level and is a state responsibility to remedy. “You have to maintain quality in the classroom,” says Professor Noguera. “We focus our evidence of if these kids are learning so narrowly on standardized testing, when we should be looking at more authentic evidence. What you’re seeing in many schools now is the narrowing of a curriculum to only focus on test preparation.”

McLeod is in agreement that the state is at fault, and believes that her program wouldn’t even have to exist if policy makers were doing their job. She hopes to one day have influence over the New York State Department of Education, for example, to help implement her frameworks into the state’s curriculum.

“What kids really need, in addition to academic support, is people who care about them, and people who will inspire them. If this program is doing that, then it is helping,” Noguera says. “Every once in a while, you’ll have a student like Krystal, who comes from a low-income family, who shows you that with the right support, there are lots of talented poor kids who can achieve at a very high level.”

When it comes to Krystal’s future, Kandice envisions the world for her, but does not want to limit her potential. “I just want to see her walk her path, and live her destiny,” she says.

With the start of 2015, McLeod received the Harry S. Truman scholarship, a prestigious and highly competitive federal scholarship presented to college juniors for leadership potential and a commitment to public service. She is also expanding “My Right To Learn” to the five boroughs in May.

McLeod remains adamant that putting herself first is simply not an option. “One of the things I think holds true for anything I do is something that my mom said early on in life,” she says. “If I ever have the chance to make it out of a working class situation, it is super important that I would stretch my arms backward and pull up a fallen brother or sister, because success is nothing if it is befitting only one individual.”